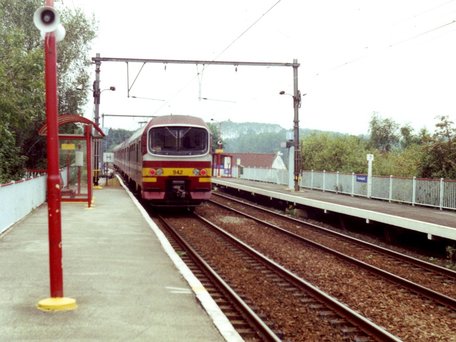 A good ‘old fashioned’ Belgian railtour (in the sense that I hadn’t done any Belgian railtour weekends for a while, barring the PFT tour done as part of a German trip). Belgian line 26, my last piece of Belgian passenger track, had reopened recently so that also was an objective. Only the beer festival knocked the weekend off its wheels slightly…

After a very harassed and sleepless week with DV Tools and Adobe Premiere [we’d been editing a video to a very strict deadline, using a very buggy early Windoze version of Premiere which caused us no end of problems] a trip to Belgium seemed like a mixed blessing! Nonetheless, off to Telford Central for 0753 to Stansted Airport with, thank goodness, some empty seats. Some delay outside, and at, Wolves such that we left at 0822 delaying 0819 Euston and 0822 Coventry… Lottery tickets and cash machine at Birmingham then out to Irrational on a slightly late 0906 VXC to Brighton.

Main terminal at BHX this time as I was using Sabena – draught Bass, Brew XI noted in the airside ‘Shakespeare Ale House’. Too early for me at 1000 so I had a pot of tea instead.

Sabena’s Airbus left slightly early – nice sandwiches, a bracing G&T [we were on Belgian time now, see] and an early arrival at BRU. Back on dry land I made the 1320 to Brussel Zuid with considerable time to spare (this from a 1305 arrival). A very quick ticket buying change at Brussel Noord got me on unit 311 at 1339 for Halle. Arrival at Halle was some 15 late. The fast lines cross from west to east coming southwards from Brussels; at Halle line 26 flies over the fast lines then descends, still paired, between fast and slow so there is no split alignment. My local crossed from down slow to down ‘fast’ (not the high speed lines) into P6 at Halle, holding up the line 26 train which was waiting to get into P2 (up slow) where it reverses. Physical junction well and truly done! 1428 to Huizingen and 1448 back finished off line 26 and, pro tem, Belgium. The pub outside Huizingen station would have been a suitable place to mark the occasion - had it been open. And it’s not even Monday!

So far (Brussel Zuid, back from Huizingen and heading north at 1523) three people have asked me about trains; 1 English, 1 Dutch speaking, 1 French speaking. Am I missing something? Perhaps so - at Brussel Noord (1539) I’ve just been asked to change a 50 franc coin!

While waiting at Brussel Noord I was wondering if SNCB/NMBS still had double deck stock as I couldn’t recall riding on any since doing Burst to Brussel in 1994-ish. Then the 1544 IC to Antwerpen Centraal appeared, formed of double deck stock. 140kph rated though, not 160 as I thought I remembered.

Arrival at Antwerpen Centraal was 8 late after an unexplained signal stop just north of Mechelen. Gestures from the driver of 2383/24 on northbound coal (?) empties suggested some sort of ‘possible obstruction - go slow’ message.

The undercroft project at Antwerpen Centraal is now well in hand with only two tracks available on the viaduct section, the stabling point gone, and three platforms to handle all the traffic.

Not strictly a railway memoir (oh, incidentally the Hotel Anonymous is without doubt the worst yet by far, but very cheap - £20 at today’s rate), but I finally got to Kulminator where draught Piraat made a particularly stupid start to the evening. Nice though. Pub was not the long bar going back from the street which I’d expected, more like t’Brugse Beertje. Locals very helpful, bar staff slightly less so. Piraat was excellent but if I’m honest, not quite the equal of draught Westmalle Dubbel in the Elfde Gebod (whose food, sadly, is not quite what it was).

Back from the Elfde Gebod, rendezvous with JR was achieved at Antwerpen Centraal and we retired to the International Seaman’s House (good place to stay) for Hoegaarden van t’vat, thence Trein der Traagheld for De Koninck Antoon, t’Waagstuk for Boon Winterbrew (8% brown, and very pleasant) and Berenbak for Westmalle Dubbel. 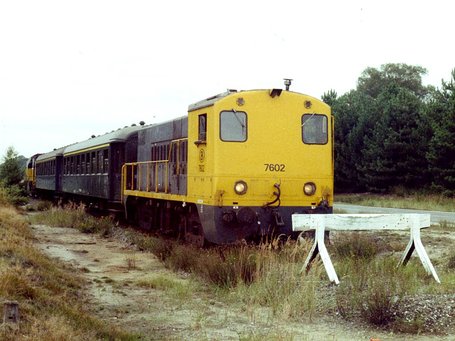 Not surprisingly (!) a good night’s sleep despite large amounts of noise. Breakfast comprised a cup of coffee at the Antwerpen Centraal buffet and a ham roll from a stall at Berchem, but this sufficed.

The tour was somewhat late away from Berchem but I did manage my first ADL cab ride on 7602 as far as Lier. An air pressure problem caused an out of course stop but the ‘Dirk’ll fix it’ method prevailed.

The branch to Zittaart was satisfactorily bashed to the bufferstops at the end of NMBS track, followed by Lommel-Maathuide also to the buffer stops. On to Neerpelt where the stub of line 18 to Hasselt was done apart from the last 50 metres or so where the undergrowth was a bit unruly. The final branch in the area was the industrial estate just west of Overpelt where we stopped around 2-300 metres short because of curvature. 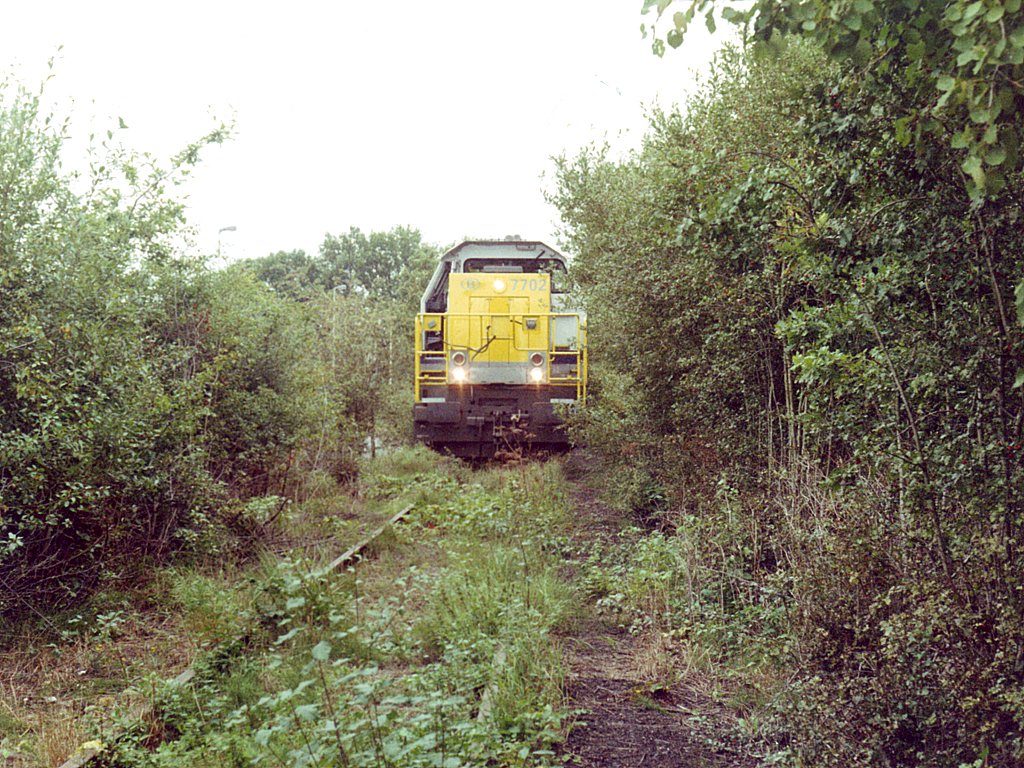 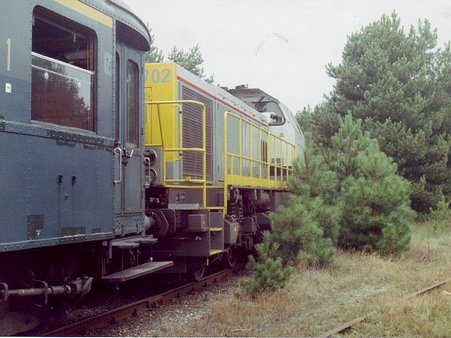 Defeated by curvature this time, 7702 on the industrial estate at Overpelt.
En route from Mol to Hasselt 7602 died again from high water temperature (Dirk to the rescue again) then at Hasselt 7702, on the other end, claimed (wrongly) to have low water level. All this delayed us to the point of running straight back to the Genk area via the Hasselt east curve instead of going round the triangle as booked.

The tour continued towards Waterschei but didn’t get there, finishing at Km 19.1. It then did a very short (200m) section of line 18 which used to run through to Neerpelt, before being stopped by parked wagons.

Onwards to line 230 towards Zutendaal where, as in 1994, wagons blocked the line opposite the bend in the Albert Kanaal. This time the crew rose to the occasion and calmly used the railtour train complete with some (including me) passengers, to pull the wagons into a loop. We then continued to Zutendaal where there were a dozen or so wagons blocking the end of the line. Most satisfactory though. 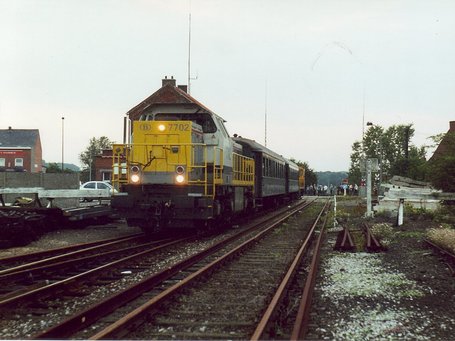 7702 in fading light at Tessenderlo. Most of the tour passengers seem to prefer the class 20-like 7602 at the other end!
Line 231 was removed from the itinerary because of curvature concerns so we went straight to 232 on the south bank of the Albert Kanaal. One wagon prevented buffer-stopping. We ran down to Bilzen as planned but went main line thence to Hasselt and Diest instead of going back via Genk as booked.

The final branch was Tessenderlo where we got as far as the station platform. Apparently regular freight goes to Paal and the reason for refusing tours is unclear.

Return from Tessenderlo was (mostly) in the dark and slightly delayed by single line working. Route was Aarschot avoider, Lier then direct to Mortsel). Nevertheless we arrived at Berchem at 2121 and after a quick ticket purchase, caught the ‘slightly delayed’ 2121 to Antwerpen Centraal. Bed at the frightful Hotel Anonymous was reached gratefully at 2145 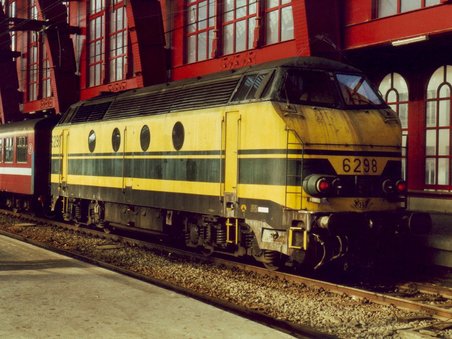 Equally frightful breakfast at the Anonymous, ‘continental’ (in the English meaning) inclusive, proper breakfast extra. In view of the filthy cutlery and plates, and [description omitted] staff smoking in the kitchen I stuck to the freebie. Of course, it was still necessary to select a pat of butter which didn’t have a dead fly stuck to it.

Antwerpen Centraal provided a reasonable coffee and a shot of 6278 on 09xx to Neerpelt before rendezvous with JR and 1004, again delayed at Mechelen by engineering, to Brussel Centraal. We proceeded to the Grande Place/Groot Markt where ‘Weekend van het Bier’ was under way. This was a superb event (well done JR for spotting it!) with a wide selection of beers under very civilised conditions and at modest (BEF 75=£1.25) prices. I cannot fault drinking spectacular beers in a 17th century market place at those prices! 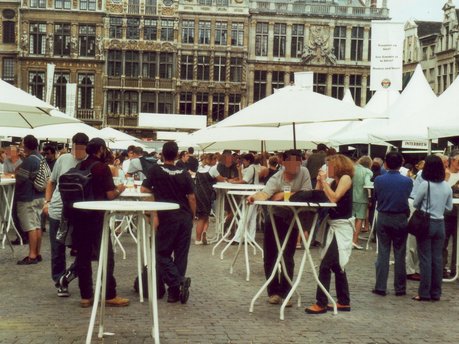 A merry throng at the beer festival in the Grande Place/Groot Markt, 10.9.00
Quite a variety was tested, but let’s not go there… It was also noted that a new Trappist has popped up at Hamont-Achel just east of Neerpelt. Interesting to note that Interbrew’s comparatively large stand was empty. [Sadly this excellent event has become something of a victim of its own success (in my opinion) and when last visited in 2014 required lengthy queueing to gain access and get beer tokens as well as being uncomfortably wedged once you were in].

16:25 Brussel Noord - airport did the leftmost possible track before Schaarbeek, thence into Schaarbeek P14 non-stop. I wasn’t paying attention so don’t know whether we did the down flyover on to the airport branch; arrival at the airport was on the rightmost pair of tracks but I refuse to worry about it!

Back at BHX after an uneventful, though slightly unpunctual, flight with Sabena, VT and CT got me home with a slight detour to the Great Western to round off the day!

The next venture was to the Rheinland-Pfalz-sponsored plandampf based on Neustadt an der Weinstraße in western Germany. This happily coincided with the annual Belgian TTB (Train-Tram-Bus) day, providing an opportunity to do the freight only line to the Valvert mineral water factory near Etalle. We fired up the Tractor and headed off to Belgium and Germany.