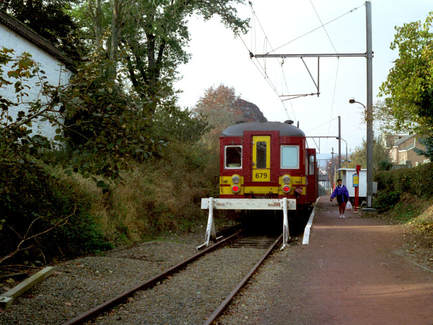 I know about 11th November being a public holiday in Belgium now, but I failed to spot it then... This trip was a beer run really but I did some track as well.

Late decision, prompted by cheap fare, to go over and use up the last day on October's Tourrail ticket. Dashed down from Telford to Dover in time for an earlier sailing than booked, allowing plenty of time to drive to Dendermonde with a couple of catnaps en route. [In rest areas of course]. Arrived at Dendermonde in adequate time to leave the car in the station car park and catch 0507 to Lier achieving (in the dark) Dendermonde to Mechelen and the south to east curve at Lint. On from Lier on the 0600 to Leuven, to connect with the legendary 0644 to Brussel Noord via everywhere. Should have changed at Aarschot, to get a window seat! Anyway daylight was upon us by the time we did the 'up' Diagem-Harenheide curve. Phew. A rapid change at Brussel Q on to 0742 Luxembourg, taken as far as Namur, in order to connect with 0850 to Huy and Liège. 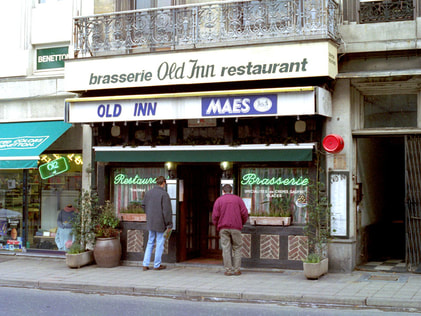 Well, you can't be trackbashing all the time. The Old Inn in Spa dispenses Rochefort beers and was found open on 10.11.95...
From Liège I carried on to Verviers Central and thence to Geronstère. I walked it back to Spa station via a local GBG pub (Rochefort 8, it being an Ardennais beer) , then caught a local from Spa to Eupen which arrived in the long IC platform 2, and another one back to Verviers and Liège.

Back at Liège I set off on 1406 to Hasselt where an enforced stop allowed time for a Westmalle Tripel in a deeply boring bar which shall remain nameless, before the 1537 to Genk. A search for a possible GBG entry in Genk was successful, with a most hospitable welcome at Bij de Waerd. Returned on the 1650 to Brussel Noord, just making the 1822 to Dendermonde. By car to Aalst, then train to Brugge and back via the 2314 Gent-Denderleeuw to do the curve from line 50A to line 50. The curve the other way was out for engineering, which didn't matter as I caught a local on line 50 back to Aalst.

Stupid [on my side, not his!] conversation with The Man at the hotel who told me it was Sunday and the shops were shut. As it was Saturday this surprised me, but he eventually managed to make me understand that 11th November is always treated as a Sunday. So it proved, but after a round trip Kortrijk-Zottegem-Gent-Kortrijk by train I was eventually able to find Delicia in Roeselare open, and return home via Calais laden with autumn supplies.

Unfortunately (for me at least) my memoirs for 1996 and 1997 have gone missing. For the moment at least the story resumes in 1998, by which time the emphasis was shifting to Germany. In January I set out via Brussels for one of Mr Pegler's excellent ADL tours in Germany.