On Track - a Gricer's Tales
September 1994, Belgium. An ADL railtour and some serious trackbashing - even a bit of steam.

This was one of a number of trips organised around railtours, when the opportunity was taken for an extended weekend, a lot of track bashing and the odd beer here and there.

Uneventful journey to collect JR at New Street at 1921, thence to Thurrock Services where Sally Line were contacted, They assured us plenty of room on 0045 sailing though we were booked on 0430. Schedule was recast to allow a quick visit to the Elephant, Faversham which proved to be having a beer festival. Those of us not driving were able to sample Greene King mild, Guernsey Bitter and Flashman’s Clout.

Onwards to Ramsgate, arriving at 2350 for 0000 checkin. Total chaos at Sally Line terminal – eventually loaded about 0105, allegedly due to volume of traffic.

Ferry eventually left at 0115 with our heroes ensconced in slightly cheaper than quoted cabins. Rough crossing to the point of sliding about in bunks, but no ill effects and we arrived in Oostende at 0600 ready for breakfast in the station buffet. Very expensive hotel, but with secure parking, was located and two rooms booked.

Decided to take the tram to Zeebrugge and back pending rendezvous with DM but overshot Zeebrugge Vaart by one stop, thus missing the return tram, eventually back to Oostende at 1020 having missed DM. Onwards to De Panne, where the driver refused to take us round the loop. Repaired to Café Au Robinson for Brugse Tarwebier and Eylenbosch Gueuze, the latter not too brilliant.

Bus to Adinkerke (De Panne) station for haulage by 6293 to Lichtervelde, thence by EMU to Zeebrugge – still a tip but looking better in the sunshine. Tram to Knokke and the tough decision to go for a beer instead of completing the loop at the end of the tramway. High speed Brugse Tripel in the Café des Nations in Knokke, thence by Inter City EMU to Brugge. Late running EMU enabled a connection to Blankenberge.

Set off on foot for the Luxembourg Café, temporarily distracted by a frituur which provided an Indifferentburger and chips for BEF 100. The Luxembourg was full of pensioners, but turned out to have a good beer range, modest (by Belgian standards) prices and helpful (even by Belgian standards) bar staff. A1 in every respect. Westmalle Dubbel and Gulden Draak sampled after several abortive attempts to try something else (Piraat, Oerbier etc). Tram back to Blankenberge station thence train to Brugge and eventual rendezvous with DM.

Quick inspection of Brugge encompassed de Garre Tripel and cheese, Oerbier in t’Beertje, Jacobin’s Gueuze in Hoefijzertje (yes, well). Returned to Oostende to find that the hotel arrangements were not as booked. A fairly firm explanation of what had been requested and agreed was given, resulting in a demand for more money which was refused. Success eventually, with rooms as originally specified. [I’m reluctant to name or criticise the hotel – due to my lack of linguistic ability people abroad have to deal with me in what to them is a foreign language. I’m grateful for this and don’t feel inclined to be too quick to blame them for communication difficulties. End of sermon.] 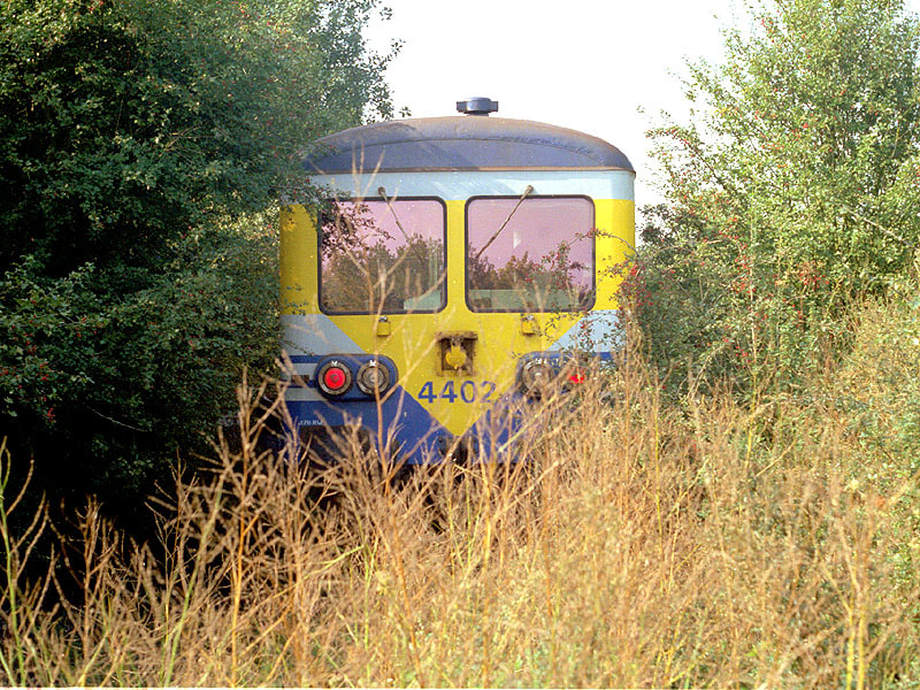 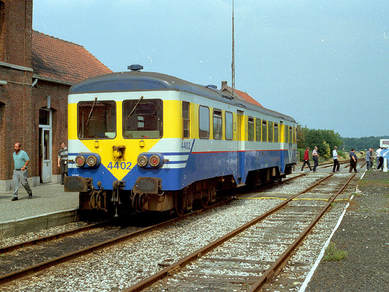 Out at 6 for a trudge through the rain to meet the ADL party and board 0634 yet again, this time to Brussel Zuid for a change. Tour train appeared on time – 4402, thank goodness with padded seats. First change to route was made on return to Brussel Zuid – a second trip out to Y Klein Eiland to do the up curve of the burrowing junction which had been missed at the first attempt.

Genappes having been removed at short notice, Sambreffe was substituted – very satisfactorily to start of impenetrable undergrowth. Local rumour was that we were the last train. Next change was at Y Josaphat where we couldn’t do the curve to Schaarbeek so ran underneath towards Jette, reversed in a reversing siding and ran to Schaarbeek via a ‘new’, or at least ungriced, west to north curve. At Weerde, travelled via flyover on Antwerpen line to Mechelen thence to Hever, instead of via Hofstade as planned. Didn’t go to Paal, stopping at NMBS limit at Tessenderlo instead [not for the last time].. 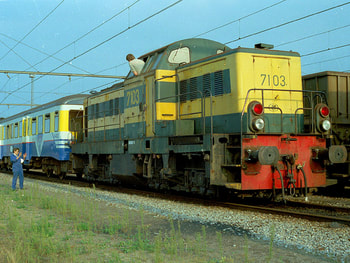 You've got about this far... 7103 manoeuvres at Zandvliet on 3.9.94
Did an extra flyover adjacent to carriage sidings south of Berchem en route to Kappellen where endless delays occurred in doing (eventually quite thoroughly) the military line with ‘assistance’ from an army diesel.

As a result, subsequent visit to (and grice of) Antwerpen Dam was cancelled but Zandvliet was still done. On the way back, reversed in Muizen yard before returning to Kontich. Second time went main line at Muizen and on to Hever. Return route through Schaarbeek was basically a combination of previous routes. Most of the time had been regained and we successfully caught 2156 to Oostende.
​
Journey to bed was via Ostens Bierhuus (Duvel) and T’Bottelje (Arabier). [I’m surprised at myself drinking Duvel in a place with a beer list as long as the O.B. But that’s what my notes say]. 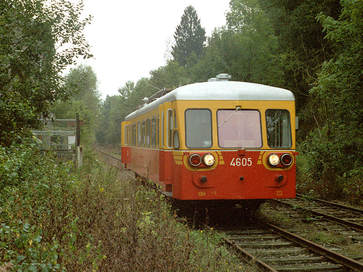 Determined (and successful) attempt to get breakfast then departure at 0830 to Spontin where there were no signs of life, so on to Ciney where we found that the Spontin service was indeed running and was currently out on the branch. After subdued grumbling, caught the 1150 which after a 10 minute stop for the car boot sale at Braibant, continued to the current end of doable track at Dorinne-Durnal, about a mile beyond Spontin. The Man said that only one trip went that far so much celebration ensued. [Looking again at the CF du Bocq in 2018, they have now gone well beyond Dorinne, to Evrehailles-Bauche, and are continuing to extend towards their ultimate objective of Yvoir, on the Meuse valley line from Namur to Dinant. Time for another visit, it seems.]. 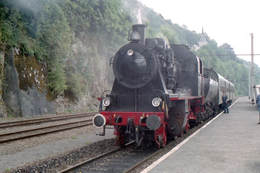 A big traffic delay caused us problems and a major diversion to get to Givet followed by a mad dash to Treignes (for DM to get the 1815 to Mariembourg) and Mariembourg (for JR and me to do 1831 to Couvin and return). All ended happily with a drive to Charleroi and the Formule 1, not exactly the top end of the hotel market. 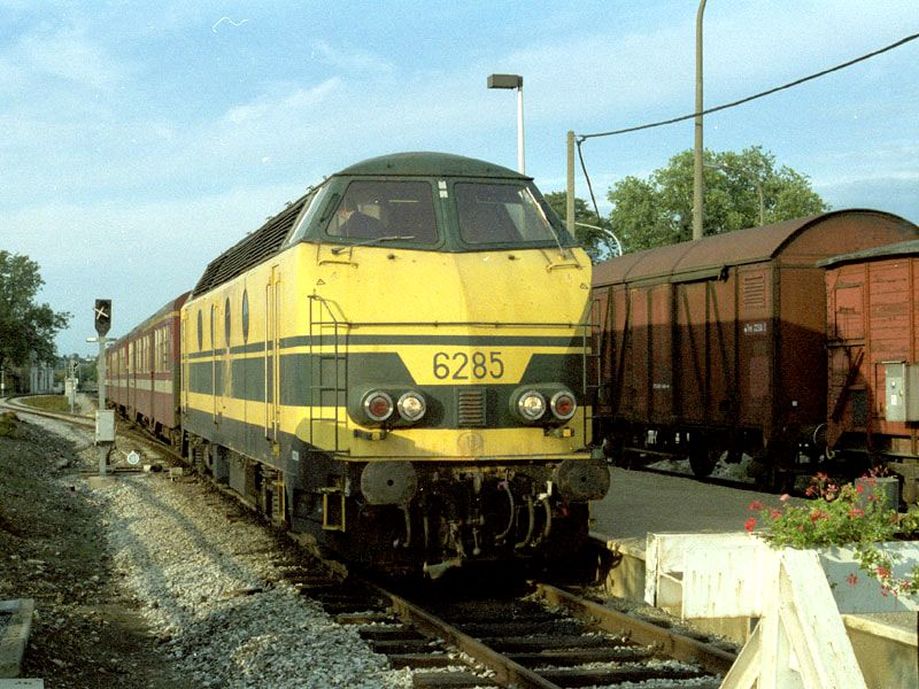 6285 at the buffers at Couvin after arriving from Mariembourg on 4.9.94 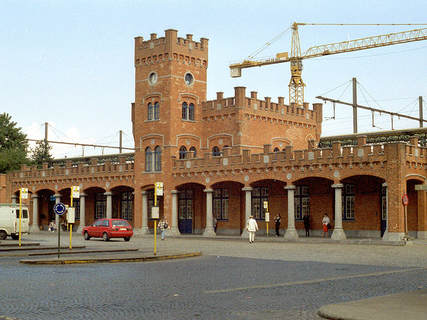 Up betimes for the 0636 Auvelais – Gembloux thus missing breakfast! Decamped with DM at Jemeppe, having done the connection on to the Gembloux line. JR was left to go to Gembloux while I returned to Auvelais to collect the car and DM disappeared to France. Drove to Gembloux to find no sign of JR. He eventually arrived on foot, the EMU having failed at Mazy. The unit arrived about 20 minutes later, so JR trundled off back to Mazy and was collected by car.

Next stop was Louvain-la-Neuve Universite for the branch therefrom to Ottignies, done both ways fortunately because there is a flying junction with Bruxelles-Namur main line.

Continued via the Bruxelles ring road [I used to think local driving here was pretty scary until my life's companion, who doesn't frighten easily, got loose on it in the Turbo Tractor some years later, but that’s another story] to Hofstad to do the curve towards Muizen and the passenger alignment thence to Mechelen, where sustenance and phones were found. Back to Hofstad to collect the motor, and thence by road to Aalst, where the station was photted at last (see 30.4.93 – I didn’t return from Burst to Aalst that time!) 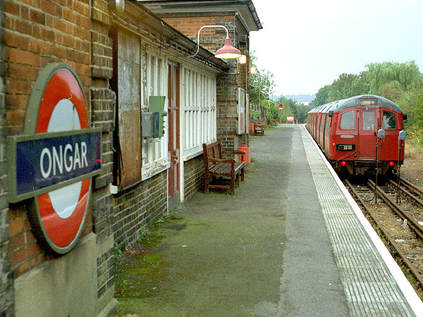 An early morning Central Line train arriving at Ongar, 6.9.94
​JR was left to travel to Burst while I went more comfortably by Espace and photted the railcar coming off the branch at Burst. Next port of call was the Delicia beer shop at Roeselare where the beer stocks for home were replenished, and thence to In de Vrede at Westvleteren for bread, cheese, and in some cases beer. Finally back to Oostende where the car was parked adjacent to the ferry terminal thus allowing a return visit to Ostens Bierhuus via a chip shop.

Not strictly part of the continental venture, but on return to Ramsgate we headed via M2 and M25 (pausing for some subsidised – by RAC vouchers - breakfast at Medway Services) to Theydon Bois where the first train of the day to Ongar was taken (this works through instead of working Epping - Ongar shuttle). On return from Ongar it was back to M25 and home, calling at Birmingham for JR to depart north by train. The Low Countries campaign was now well in hand.

In the early part of 1995 I made some more trips to the Low Countries - but either I didn't keep any notes for these trips, or the book has submerged somewhere in my record-keeping 'system'. In May 1995 the BLS and their very capable organiser CT came up with the Double Dutch Docker tour and that provided a convenient peg on which to hang another visit to The Netherlands.