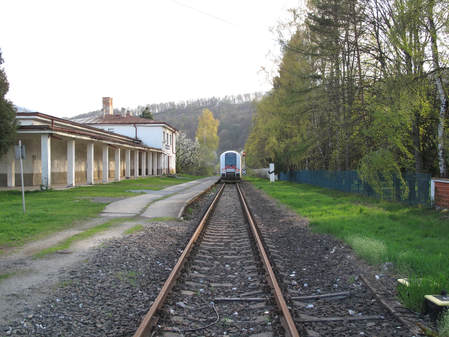 'Difficult track' : the train has finished its journey at Medzilaborce mesto (town) station in Slovakia in April 2016. But the track goes on across the border into Poland (click here to see!), and in 2017 you could do that stretch on Saturdays and Sundays in the height of summer...
What on earth is a gricer, you may wonder. Well, it's all to do with being a railway enthusiast. Among railway enthusiasts, some people collect numbers, some enjoy restoring steam locos, others are interested in signals or wagons or timetables or railwayana or tickets or ... the list goes on and on. An Internet search will give you numerous definitions; here are a few:

One source says the term was invented at the Bluebell Railway in 1970, but I beg to differ, as the term had been in common use in my university's railway society throughout my time there (1967-70). In that group the word was really only applied to people who, like me and many others, had a particular interest in travelling over as many different lines as possible.

As well as 'gricing', that particular pursuit is often called 'doing track' or 'trackbashing'. If it's a line you haven't travelled on before, it's 'new track'. If it's track without a public passenger service of any sort, that can only be done by a charter train, or an engineering diversion, or with special permission on a freight train, then it's 'difficult track' or 'rare track', and that is why the address of this site starts with 'raretrack'. I started 'doing track' many years ago, when there was still a bit of main line steam around in the UK, but it was many more years before I kept any sort of diary, instead of just marked up maps.

In 2006 I took the opportunity of a respite from work to 'digitise' the notes I'd kept of my European mainland travels so far, then decided that I may as well put them them on a web site in case anybody was interested. That's how 'On Track' came about. The Web wasn't even a dream when I started trackbashing in the 1960s, and it was in its infancy when I started on the European mainland at the beginning of the 1990s. Consequently my 'memoirs' were only written for my own amusement, but as I typed them up I found it quite entertaining to see myself change.

As far as rail travel's concerned I have something of a 'started so I'll finish' mentality, together with limited resources of time and money, and so I've elected to concentrate on (by comparison with many more seasoned travellers) a quite small number of countries. In those countries (BeNeLux, Germany, Czech Republic, Slovakia and Austria - and if you're pedantic, Monaco and Liechtenstein) once started, I've tried to cover all the lines covered by timetabled passenger services. To cover the cross-border routes I've been into all the countries bordering those, apart from Ukraine, but in most cases I've covered no more than a few hundred miles (perhaps a couple of thousand in France) and sometimes a hundred or less (Italy, Switzerland, Slovenia). There are many more that I would like to get to work on, notably Poland and Switzerland - but retirement has its advantages (time) and disadvantages (money and age)! Never say never isn't a bad adage though...

Meanwhile if you're interested in taking any of the journey (so far) with me, just click here or pick from the menu 'The Tales' at the top of this page. Most pages are illustrated (click on the pictures for a larger version), and if you're not railway-obsessed like me you'll find that there are plenty of asides, which for some reason seem quite frequently to involve visits to what in the good old UK might be called 'licensed premises' and a gradual realisation that many of 'those foreign chaps' can brew exceptionally good beers!