After several trips with Ryanair, the continuing threat of bankruptcies and  strikes in the airline industry, and above all the total loathsomeness of the whole flying ‘experience’ I’d decided even before the Great Icelandic Volcano Débacle that I’d try to avoid flying for a while.The Dampfspektakel event provided the first test of my resolve; two previous visits to major plandampfen had demonstrated the value of having a car available (on one we did, and one we didn’t) so the Mark II Turbo Tractor was equipped with hi-vis jackets and fire extinguisher to comply with the regs, and off we went. As fairly frequent travellers to the mainland by car, including several trips to Rheinland-Pfalz, we thought it would be a doddle. Now read on...
Thursday 1.4.10

We really should know better than to travel at Easter... After relocating the moggies the trip commenced with an (ultimately successful) hour long search for H’s driving licence. Off we went, only to hit the ‘long delays’ signs at M42 J2. Dived off through Redditch and Henley-in-Arden [home of the late and legendary T.R. Perkins, arguably the first great trackbasher] to M40 J15. Off we went again, only to hit the ‘M40 closed at J6’ signs. Phone calls to our daughter elicited that there were two hour delays, so we dived off again at J10 to go and spend 20 minutes at temporary lights in Buckingham and another 10 queueing to get to M1 J13. And so to the M25, surprisingly calm until you hit the queue for the QE Bridge toll, which stretched back to J29. Sigh. The last bit into Kent was easy.

0712 checkin for Eurotunnel so 0530 from chez daughter seemed so simple. Until we stopped a mile down the M20, stationary traffic as far as the eye could see. Obstruction was removed at about 0610 – H, who was driving the first stint, rose to the challenge and delivered us to Cheriton in time for a bacon sarnie. Eurotunnel were in a fairly manic mode and hustled us away straight through passports/security, straight through the waiting area and up on to the bridge where we had to wait for a while. The 0742 left early, with bacon sarnies finally consumed thereon!

No problems with the tunnel or the A16, and minimal delays in the long and much warned-about roadworks stretch on the A25 [luckily we were heading away from the coast of course]. After a diesel stop we contrived to miss an exit at Lille but had the situation recovered within 5 minutes, more by luck than good judgement. [H’s first brush with the traffic hell that is Lille, as far as I recall, but again she met the challenge with considerable aplomb].

On into Belgium with a detour for me to have my photo taken at my namesake village on the Meuse. Lunch was taken at the next motorway caff – Leffe was available but it being my driving shift, I didn’t have any.

Stationary again near Neufchateau, traffic as far as the eye could see. Again. With the help of M. Michelin we trundled off through Neufchateau and rejoined the motorway further south. Fuel stop near Luxembourg (90p/litre vs £1.16 at home) then just when we thought we’d cracked it – ‘Accident 10 km’). We dived off yet again, for a very slow crawl through Wasserbillig and on to Ehrang with the whole trip taking 8 hours [vs the AA’s estimate of 4¾, plus an hour or so for our various stops]. Awful.

A bit of railway interest at last, with 78 468 photted heading into Trier in the last of the daylight. Supper was then taken at a nearby pub, the name of which escapes me. It was pink (the pub, not the supper), sold Bitburger and König Ludwig weissbier, and though very friendly it offered pretty indifferent food. 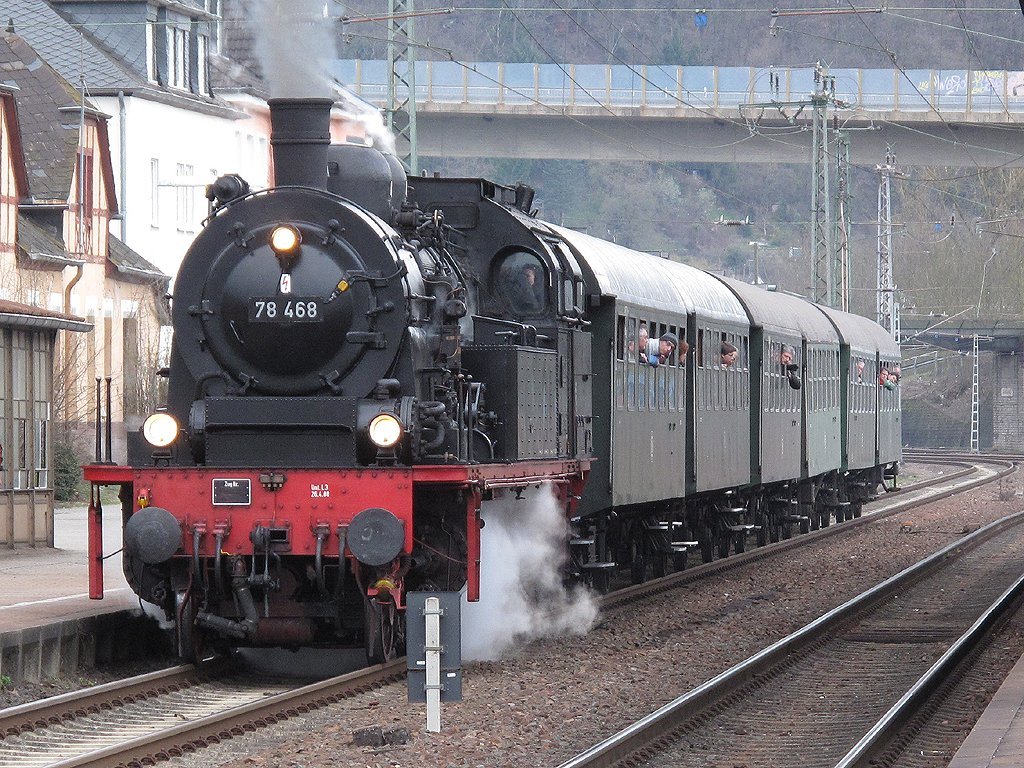 Lots of photting at Ehrang, Kordel, and a good lineside location just south of Kordel. Locos included classes 03, 01, 41, 78, 23, 38, 50. A brisk plough through ankle deep mud took us up to the slightly creepy Burg Ramstein. There’s a reasonable restaurant there in which we had a very nice early evening meal in between the 1656 and 1856 kettles; Paulaner was available, thank goodness. We’d also managed Franziskaner in a different Bitburger pub at lunchtime.

The day finished with a reconnaissance visit to Trier Hbf., there being no public transport available early enough in the morning. 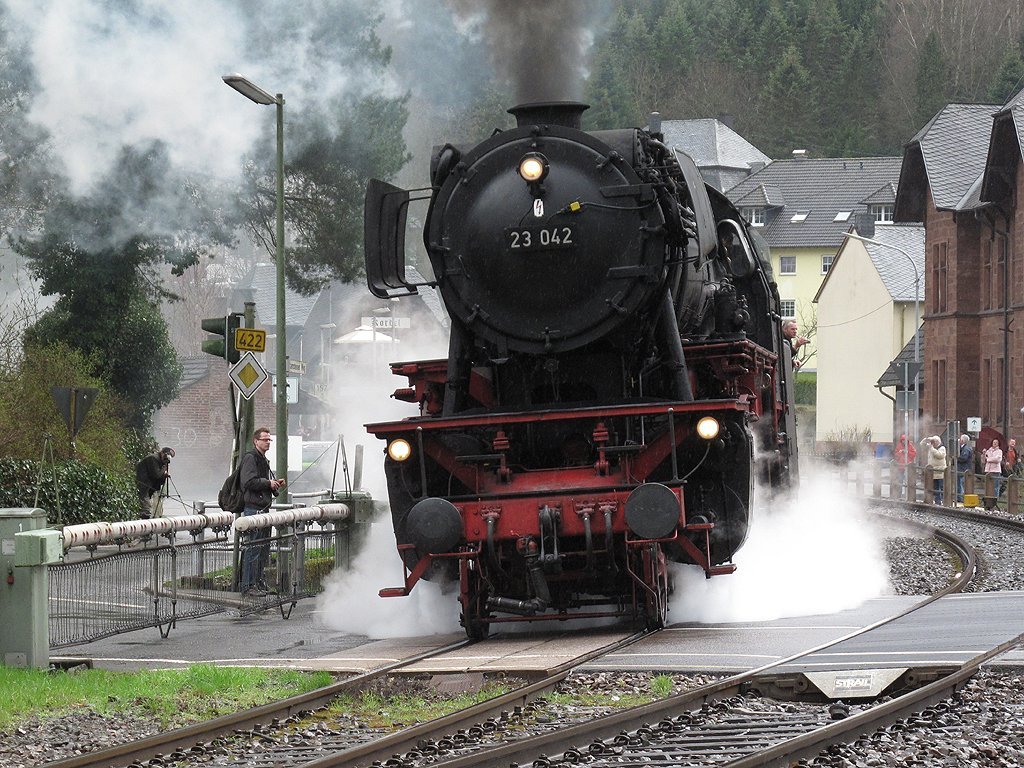 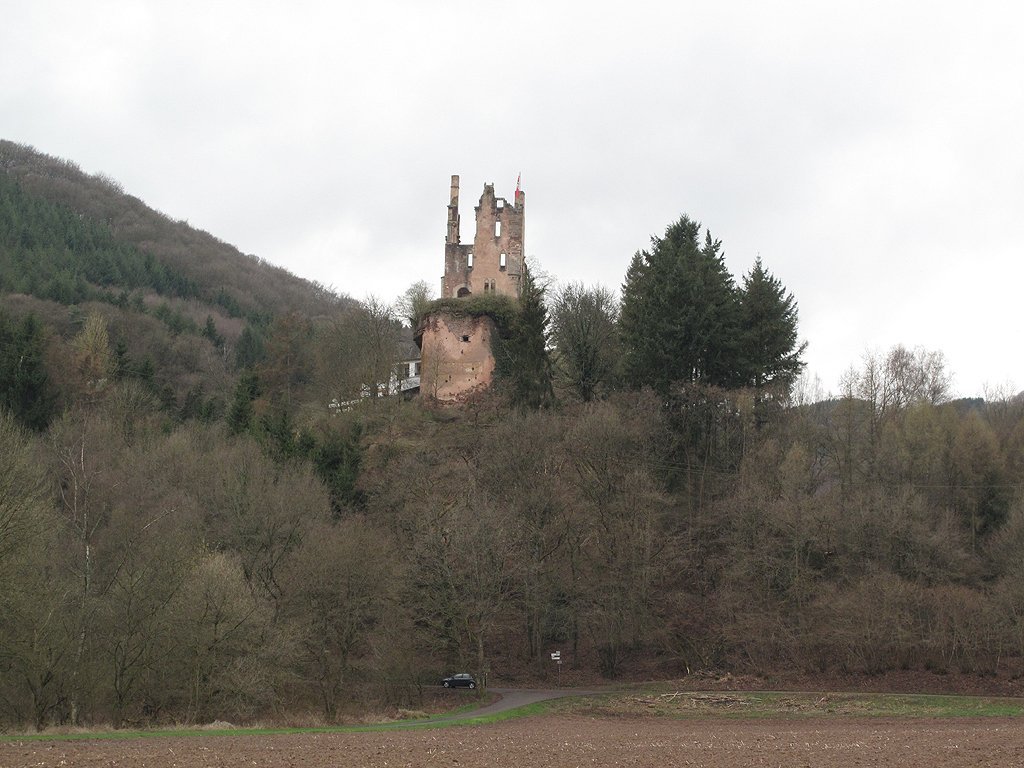 The castle at Burg Ramstein, with restaurant to the left. It's an easy walk up - if you use the road.
Sunday 4.4.10

Off at 0535 for the 0620 from Trier Hbf. We managed to get lost again but last night’s reconnaissance still paid off ‘big time’ when we stumbled on somewhere we recognised. We made the 0620 by 3 minutes. Hafas had told us to change at Merzig but common sense said Saarbrücken Hbf., and that paid off with a breakfast (well, in my case a cup of coffee) opportunity. Haulage was a particularly rough-riding 426; the onward connection to Kaiserlautern is – oh joy – another 426.

Very quick dash at Kaiserslautern on to an S2 for Heidelberg which was – surprise – another 426. 75 minutes at Neustadt a.d. W. Hbf provided a breakfast opportunity for me which was most welcome. I’d thought I’d clocked ‘Speyerbach’ in steam on the DGEG shed as we came in and this proved to be the case, to my great delight. [The whole purpose of this day out was to do the Kuckuckbahnel, including the physical connection at Lambrecht, and preferably behind Speyerbach. I’d been thwarted at least twice previously by huge queues at the booking office, and by Speyerbach being broken]. The DGEG gronk brought the ECS out of their depot, with ‘Speyerbach’ already attached.

Up to Elmstein in fine style, pausing for the booked photo stop at Erfenstein which is fairly pointless with the sun in the wrong place and muppets in every place.

Elmstein’s a very pleasant quiet village with a (comparatively) rather austere Protestant church and a pub dispensing the fairly appalling Bellheimer pilsner, a close relation to the equally appalling Park version. After our wander we returned to the bothy next to the station which was dispensing bratwurst (inter alia) and the vastly better Bellheimer weizen which wasn’t at all bad. We elected for (again comparative) comfort in the more modern coach next to ‘Speyerbach’ on the trip down the valley.

Back from Lambrecht to Homburg on some deeply obscure dated service worked by another 426, and yet another one from there to Saarbrücken. A set of Dostos to Trier would have been a welcome change had they not been quite so decrepit and filthy inside!

Supper was taken in the wholly admirable Blesius-Garten in the Trier suburb of Olewig. A very fine ‘brew-hotel’ with excellent Hell and Weizen, not to mention the awesome schweinhaxe, or variant thereon. 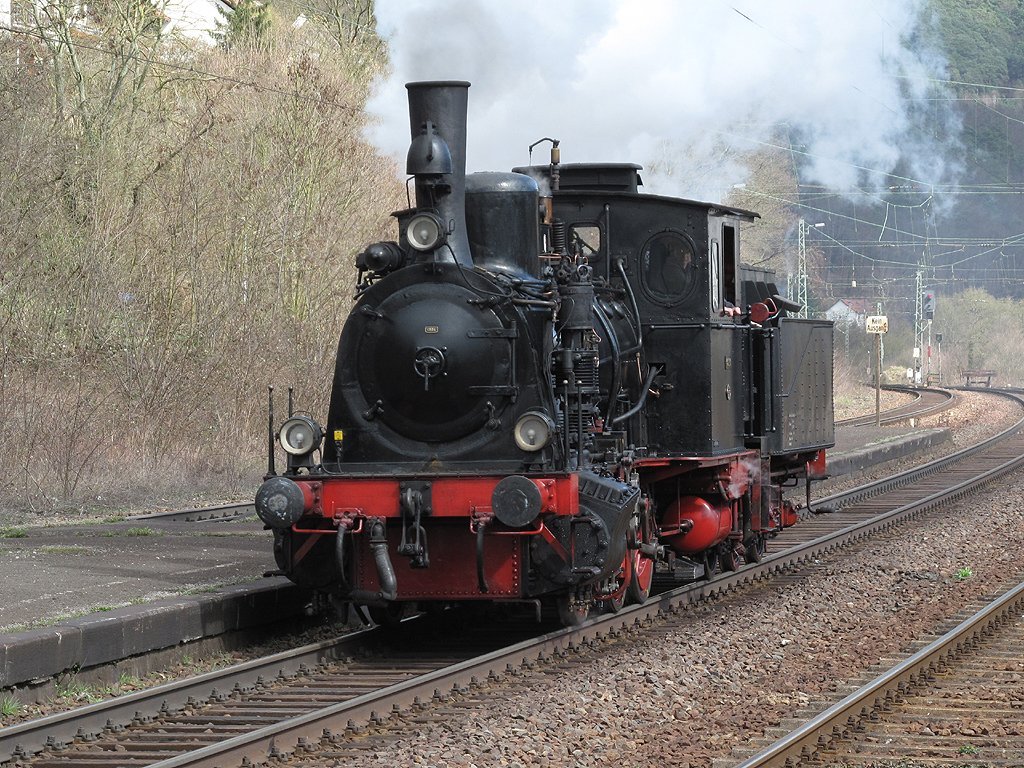 More photting at Ehrang after breakfast then (on advice from another Brit, for which thanks, regarding the timings) off to Schweich to phot the ‘Rheingold’ set, headed by 41 360 with E10 1239 pushing at the rear. A bit disappointing as the 41 was doing very little. Thence to Gerolstein via an abortive attempt to phot 78 468 which passed just after we’d given up waiting at St. Thomas.

Gerolstein was heaving – though it has plenty of parking it took us a while to find somewhere to leave the car that was safe and legal.That done we retired to an Italian for lunch before more photting, mainly of the P8. On advice from the tourist info lady we set off for a strenuous walk, based on local volcano history, to the north of the railway. It ended up with a very fine near-aerial view of the station area. Volcano craters, lava flows, squirrels (red) and caves were encountered en route.

Returning about 1800 we retrieved the car and moved it nearer the station before getting the shuttle (Kriegslok one end and 0-6-0T ‘Merzig’ at the other) to the depot for the evening photo line-up. Bizarrely this has to cross the turntable to get to the platform beside the roundhouse. The last few locos were being assembled for the line-up with a running commentary provided. Food and beer (Kölsch from a brewer whose name escapes me but began with an R) were available and taken.

More photting once it got dark (although far too many people present for me to get the ‘classic’ shot) and we got the first available shuttle, by now diesel hauled, back to the station for a long and rather intimidating drive back to Ehrang, arriving about 2300.
Tuesday 6.4.10

Away promptly [fortunately] for the long haul back to Kent, pausing in Luxembourg for as much diesel as we could get in! Uneventful until nearing Gent, where it all went horribly wrong again. We left the motorway and did 10 miles or so on a parallel route only to find the motorway still wedged. We gave up at that point and settled for a cross-country route to Westvleteren for a quick lunch at In de Vrede and a top-up of the St Sixtus supply, then a visit to De Panne and its beer warehouse and finally the usual garage in Adinkerke to stuff in yet more diesel.

Uneventful for the rest of the way, with the day’s only rail interest being a punctual trip with a less manic Eurotunnel. [I don’t blame them for being manic on the outward trip – it was Good Friday after all, and they were commendably efficient].

No rail interest at all today, and fortunately no road interest either as we were straight home from Kent without problems. Verdict: too far to drive!

The drive was awful, both ways but particularly outwards. However it was more than made up for by a very good few days with Dampfspektakel and the Kuckuckbahnel.
Once home and with peak trackbashing season approaching I had to make haste to get my passport renewed before making any further plans. With that safely done it was time to hatch an all-rail scheme., so in July I did a 10-day Interrail, split into two parts (one would have been far more economical, but might not have been very popular with life's companion!). I started by heading for Germany.