Having encountered the German Christmas markets (just) before they got overrun with British grockles I’d told my wife about them and this generated enough enthusiasm for a visit. Having wasted a couple of years’ opportunities through lack of reasonable air fares (I’d been trying to get to Bavaria) BA eventually came up with a good offer from Birmingham to Frankfurt so a weekend visit was arranged. I’d been very taken with Bamberg, and had it flagged for a return visit even before I’d realised quite how many breweries it had, so we based ourselves there.
Friday 12.12.03

Up at 0415 after suitable humiliation in last night’s Christmas quiz! Away on time at 0500 by car to BHX, arriving without incident. In due course ATC decided to delay our fairly full Embraer 145 and we took off at around 0805, 50 minutes late. Some time was ‘regained’ though and we cleared customs at FRA at around 1035 (1005 booked arrival). After a queue at the Reisezentrum for tickets (and good advice) we made it to the platform at 1101 for the 1103 to Frankfurt Hbf which was the train of last resort. Very hot it was too.

Fuel was taken on at Frankfurt Hbf before departure on an RE to Würzburg. This ran in a very leisurely manner, losing time all the way through lack of enthusiasm with some help from signals. We made the 13 minute connection at Würzburg by 6 seconds… to be fair, it was held. A tilting kart on a service to Bayreuth and Hof provided onward transport to Bamberg where we changed to a 2 car low floor thing to go up the branch to Ebern. Both branch and Ebern proved impressively uninteresting, though the station’s on the edge of town so that might be a harsh judgment. Not of the branch though!

Back at Bamberg the bus stop was found with ease due to previous Internet research and we made our way into town and on to the Ibis. Following booking in and a short kip, it was off to view the Christmas market and sample the glühwein. The market ceased at 1900 so we moved on to the Spezial (closed on my previous visit) for rauchbier which was hardly smoky at all, and a most excellent schnitzel. This was accompanied by conversation with two locals (still) on their way home from work – an IT man from a manufacturing company and a local government solicitor. Final stop for the day was Schenkerla for two very smoky rauchbiers and lengthy conversation, this time with a retired local who’d spent 5 years at school in Australia, plus a pharmaceutical sales manager and a physiotherapist from Frankfurt who were on a weekend away! A jolly session, albeit it cost an hours sleep… 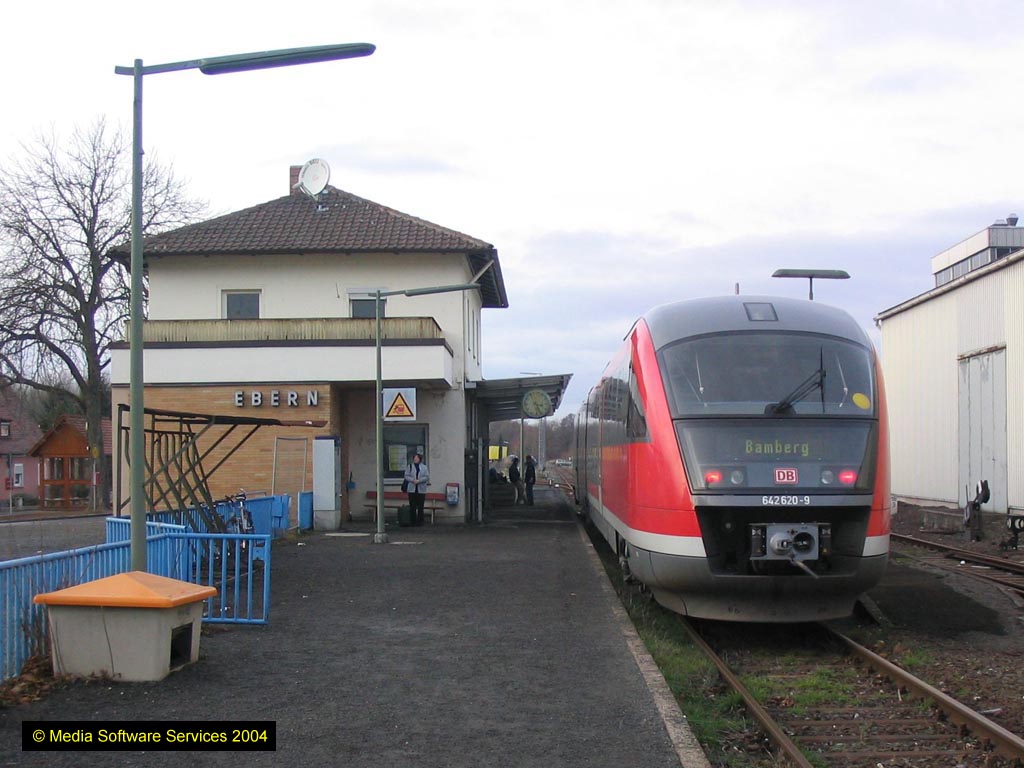 Having travelled from Birmingham via Frankfurt we managed to get a ride on 624 620 to Ebern before darkness set in
Saturday 13.12.03

Far too early a breakfast (0645) but we just made the 0740 bus to the station where the new timetable CD was procured – hooray. First train was 0806 RB (electric loco) to Forchheim to do the Ebermannstadt branch. Pleasingly, branch trains start from P5 but join the main line and run wrong line for a few hundred metres before diverging eastwards. The branch train was a few minutes late waiting connection so turned round very rapidly – no loss as it was raining hard. Back at Forchheim we went to the shop and returned to find 52.8195 with a kettlex heading towards Bamberg – this obligingly backed up and did a storming photo run towards the station.

A jam packed RE to Fürth was a bit of an anticlimax. Rain was still bucketing down at Fürth so we sat in the train to await departure at 1030 for Markt Erlbach, a pleasant enough rural trundle on 614 034 to a small market town. By the time we’d found the two open pubs it was too late for a beer (story of my life) so we made do with watching a funeral cortège on its way to the church preceded by a lad with a cross…

Back at Fürth a quick cross platform got us on to a 614 with all female crew to Cadolzburg, a 25 minute potter round the southern suburbs of Fürth and out beyond the Rhein-Donau canal. There was only 4 minutes to get wet at Cadolzburg before returning through diminishing rain to Fürth where we changed to the U-Bahn (U1) to go on to Lorenzkirche to visit Nürnberg’s very large and crowded Christmas market. Onwards from there by U1 to Nürnberg Hbf and U2 to Nürnberg Nordostbahnhof which turned out to be a single platform station with a small shelter, some 200 metres from the U-Bahn station. We’d missed a previous additional service by some 25 minutes so had another 35 to wait for a pair of 644s to Gräfenberg. The extra service was crossed at Eschenau – it seemed the gripper was working both services as he joined us there from the inbound train.

Technical daylight just persisted to Gräfenberg where (yet again) there wasn’t time to go to the pub. The phots might be interesting…[and then again, they might not].  Return to Nürnberg in the dark featured a replan to allow a return visit to the Weihnachtsmarkt between arriving at 1730ish and departing on 1850 to Bamberg for the last bus service – finishes 2000 on Saturday for some bizarre reason.

Bamberg was heaving and we failed miserably with the first pub, however Eulenspiegel obliged with a superb steak and a very smoky rauchbier from Bamberg’s St Georgen Bräuerei.
Sunday 14.12.03

0800 being the only bus available, the executive decision was simple. It suited quite well with the 0824 train, allowing time for debate with the ticket machine. As of today, SWTs are cheaper from the machine than from the booking office. 0824 RE to München was taken to Fürth Hbf for a 6 (in the event 5) minute connection into a Frankfurt-bound RE. It was sufficiently wet and windy by then for the passengers to be huddled in the subway! Things were better at Neustadt (Aisch) for a quick transfer to a waiting 642 for Steinach. This 29 km journey takes 40 minutes, suggesting the track is none too brilliant – the ride suggested the same in places.

Another 642 (642 207) from Rothenburg ob der Tauber ran in parallel to us at Steinach, saving us again from standing in the cold. It’s a fairly short run down to Rothenburg and by the time we got there the weather was dry and reasonably pleasant. Track continues over the level crossing southwest of the station though I couldn’t see how far.

Rothenburg itself proved stunning – tourist trap (which it definitely is) or not, it’s well worth anyone’s time to visit. The Christmas market was taken in and we had a very pleasant lunch in the Golden Griffin accompanied by half a litre (bottled unfortunately, as they’d run out of draught) of the Christmas beer from a local brewery.

Onwards then on the 642 to Steinach. This was delayed a few minutes, during which we heard of the capture of Saddam Hussein, by the arrival of a late running Nikolasfahrt headed by 52.7409. Second chance encounter with a kettle on the main line in three days, and there was another in the area yesterday (Koblenz-Nürnberg) which we didn’t see.

Steinach to Würzburg was an electrically hauled RB. We had a wander up into Würzburg centre to look at the market, which was sufficiently tawdry that we decided to get 1533 RE to Frankfurt instead of 1633.

On arrival at Frankfurt there was insufficient time to do anything useful so after a certain amount of hanging about we caught an S-Bahn from the main line platforms (21-ish) out to the airport, returning home on an RJ100 to Birmingham and thence by car.
With reopenings in Schleswig-Holstein (including a cross-border line) and various things I'd been prevented from doing by engineering works, there was scope for another visit to Germany as soon as there was a bit of daylight in 2004...