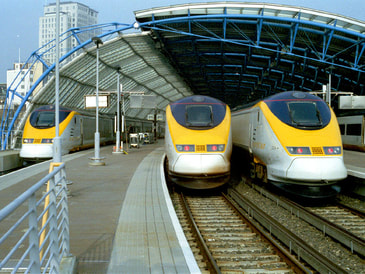 The excuse this time was to do the Eurostar connecting service via the Latchmere Jn-Longhedge Jn curve, plus the Eurostar service itself with motley connections at Cheriton and the LGV route to Lille, allied to one of Richard Pegler's excellent ADL tours starting from Oostende.

​Hasty departure from Telford to catch 0737 to Wolverhampton - too early but we didn't want to risk a missed connection. 0859 EPS service to Waterloo was advertised as 3 minutes late but arrived early and waited time. This was the pattern all the way to Waterloo where we arrived at 1130, 16 minutes early. Passed the 1127 to Brussel, and a Paris service, between Shepcote Lane and Waterloo - fairly irritating, if understandable. A foray to the Hole in the Wall provided poor Brakspear's and excellent Adnam's accompanied by a reasonably priced shepherd's pie. Returning to Waterloo we found London Underground style entry barriers followed by an airport style X-ray machine. The waiting area is under the platforms - long, thin and curved! It would be extremely full with 1600 people were waiting for fully booked Brussel and Paris services. Up top, sets 3208, 3229, 3224 and 3226 were present - a fine sight which you can't photograph because the platforms aren't long enough. 3226 was on the Brussel service and left about 30 seconds early. The ride is very quiet and comfortable and there are nice touches like tables whose edges fold up to make it easier to gain and leave your seat. Unfortunately there is only one bay with a central table each side of the coach, the remaining seats being aircraft style. 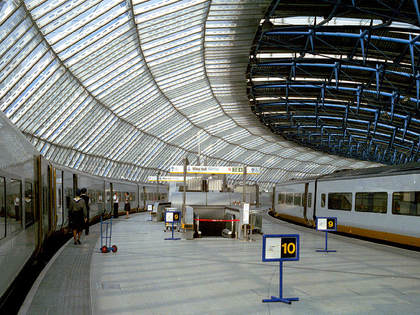 The elegant interior of Waterloo International at platform level belies the cramped warren below. [Sadly, St Pancras 20 years later is much the same]
After leisurely progress through Kent we were in the tunnel in just over an hour, the transit taking 25 minutes instead of the 20 which was announced. Running on the left through Calais Frethun we eventually crossed over to the right. Having passed a failed TGV we reverted to left hand running and had a spell of 300kph running before arriving 7 minutes late at Lille Europe, a modern concrete 'cavern' only marginally better than Paris Montparnasse. The 'classic' line to Tournai is gained immediately south of Lille Europe, the TGV line diving to the left and passing under the classic line as it heads towards Paris. Uneventful run to Brussel with much construction work on the LGV evident between Enghien and Brussel. Arrival at Brussel was 2 minutes late. We were briefly delayed by immigration who kindly stamped my passport ('if you like'). Having eventually convinced the booking office that there is such a thing as a 5 day B-Tourrail ticket we just made the 1707 to Zottegem from which we decamped at Bockstael. A 3 minute connection was made on to the 1724 to Braine l'Alleud which goes via the W-E line to Y Josaphat and then via the St Job-Linkebeek curve. At Linkebeek exhaustion set in and we retired to an adjacent hostelry for a Hoegaarden - by this time light was fading and we caught the 1829 to Aalst in order to do the other side of the Linkebeek-St Job flying junction, then gave up for the night. At Aalst we called in at the 'De la Gare' just outside the station to book rooms for Sunday, and by great good fortune just had time for a Duvel before the 1957 to Gent and 2030 thence to Oostende. 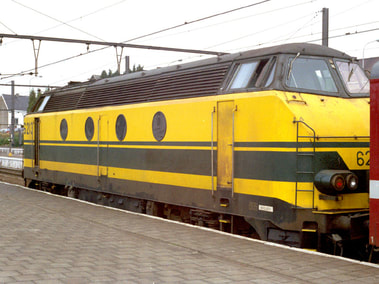 The effects of last night's Piraat were noticeable as we staggered to Oostende station buffet for breakfast followed by 0646 to Antwerpen Centraal. This became increasingly packed with commuters and lost some time in the Antwerpen Zuid force field but we were able to make the connection for Lier at Antwerpen Centraal. At Lier we changed again to do the Turnhout branch, ending up in platform 2 wiping rust off the rails by virtue of being in the front of an 8 car set. Only the first two of these took us back from platform 2 to Lier where we made a 1 minute connection to Aarschot (for the west to south curve) and Leuven (for the short stretch from the junction with the avoiding line to the junction with the Brussel line). From Leuven we took a Liege/Genk-Knokke/Blankenberge as far as Gent, changing there to diesel haulage for the line to Zottegem and Geraardsbergen which was the intended lunch stop. It turned out to be devoid of food or decent beer, though busy with freight.

After a token Hoegaarden we continued on a stopping EMU to Ath which took us on to Brussel Zuid. Food was obtained but we failed to locate the GBG bar [what a confession - Au Laboreur is obvious even from a passing train!] and ended up with another token Hoegaarden. The 1544 to Dinant took us round to Brussel Schuman. Here we had a 6 minute connection for the 1607 to Hasselt which in addition to doing the Etterbeek-Delta curve also does the PSUL [Passenger Services over Unusual Lines] connection from Harem to Diagem (a flying junction unfortunately so it will have to be done the other way). We arrived at Leuven just in time for a 1 minute connection into the 1645 to St Niklaas which was packed to the doors with students and was delayed nearly 10 minutes waiting a connection. Time was regained en route and the original plan to bale out at Mechelen was abandoned due to opening time not being until 1900. We continued to St Niklaas where the 1732 to Gent arrived at 1750; I got off this at Lokeren where, fortunately, the connection to Dendermonde was made with the 1732 ex St Niklaas and not the booked 1748. 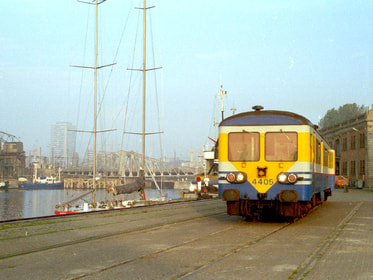 A lovely autumn morning finds the newly washed 4405 on the ADL tour at Oostende's Oostkaai on 14.10.95
​As a result I got into Dendermonde at 1820 just as the light faded, having left JR to go straight back from Lokeren to Gent and Oostende. My return to Oostende was via Gent where line 50A was still in a degree of chaos, resulting in Knokke and Blankenberge passengers being wedged into the Oostende train as far as Brugge. The day was completed with a well done steak (Belgian definition, i.e. medium) and an excellent Boon Gueuze.

On time departure at 0700 for an intolerably overcrowded railtour on 4405 which started by going through the carriage washer on the down side at Oostende then, gleaming in the sun, up to reverse by the UCB nylon factory before going down to Oostkaai where a wagon was shunted out of the way so that we could get as far as possible. Both branches at Oostkaai were thoroughly done, but Westkaai was omitted because of road works. We continued to Brugge, passing through the station and yard on to the stub of line 58A to Maldegem and Eeklo. This was overgrown, even by ADL's high standards! 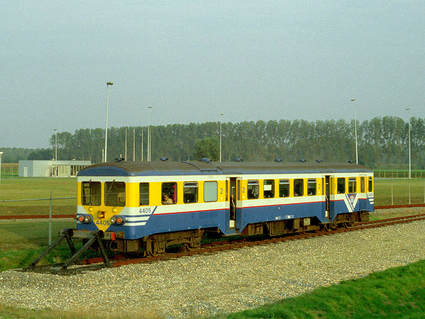 4405 at the buffer stops at Axel on 14.10.95
​The next port of call was the depot where the dock shunters are maintained, then back through Brugge to get to the branch to Brugge Dokkai. Here we did the westernmost line until a totally blocked crossing was found. Two previous crossings had been unblocked by tour passengers with various implements including a spade borrowed from a nearby factory. Much appreciation was expressed to the guard for this initiative. We then did the easternmost branch and the westernmost of the two central ones before returning to the main line to run through to Gent Zeehaven yard where we waited for almost half an hour for some level crossing gates at Wondelgem to be temporarily cleared.

​After another wait at Wondelgem we continued up to Sas van Gent and on across the ship canal to the outskirts of Terneuzen. Here we reversed to run down to the buffer stops on the Axel branch (which diverges from the original route to St Niklaas about 1 km before Axel). We returned to Terneuzen, this time continuing to the end of the line at the old Terneuzen station where four NS class 22s were stabled. 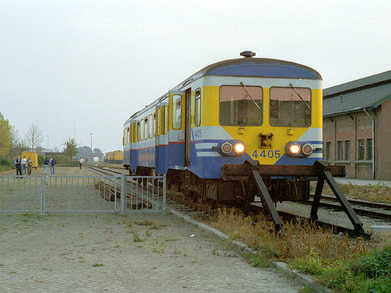 More buffer stops, this time at Terneuzen. 14.10.95
On the outskirts of Terneuzen we were told that the swing bridge was to be closed for an hour in 15 minutes time and asked to decide whether to cross over now and do the Dow branch or do the remaining short branches on the Terneuzen side. The decision went overwhelmingly in favour of the Dow branch, but the bridge had opened by then so we went down one short branch to the Broomchemie works. By now the bridge was back in use (10 minutes) and we ran straight back to Sas van Gent, inexplicably missing the opportunity to do the Dow branch. Arrival back at Gent St Pieters was a few minutes early which just made matters worse. My subsequent strong dislike of a certain well known Gent pub and its staff, and the Witkap Dubbel, may have been influenced by the goings on at Terneuzen. 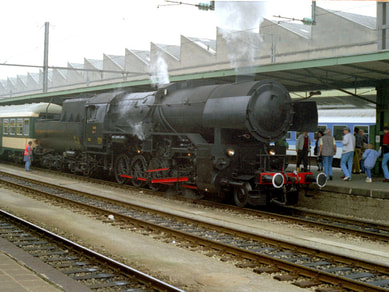 Another hideously early start for breakfast at 0515. All ADL persons naturally queued up at 0515 even though the train wasn't until 0617. Excellent breakfast, way beyond the 'simple buffet' promised by ADL and including sausage and scrambled egg for 'those as wanted'.

​The 0617 to Köln appeared in due course and provided an uneventful ride to Brussel Noord. Here we changed to the 0823 to Milano Centrale which for some obscure reason conveys one coach for Luxembourg. It is booked as first stop Arlon but stops to pick up at Namur. This arrived more or less on time at Luxembourg where the Belgian loco and one coach were removed and (presumably) a French loco attached at the other end. 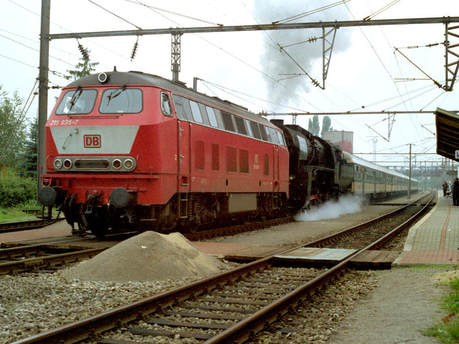 215 035 gets a free shove out of Wasserbillig from 5519 on 15.10.95
5519 (the Luxembourg based Kriegslok) was attached in good time to the Musel-Nostalgie Express and departed in fine style via Howald (new track here, back on to the main line) and the freight line to Oetrange. Single line working caused a slightly late arrival at Wasserbillig where a DB diesel was attached, to everyone's irritation - not least mine because I wanted to photograph 5519 departing. [I think this had to do with 5519 not being Indusi fitted at the time]. It made quite an interesting shot anyway. [and as it was a 215, probably the haulage people liked it!]

I whiled away a few minute purchasing Chimay Rouge from a local supermarket before catching the 1150 from Wasserbillig to Trier Hbf in order to do the normal passenger line while the tour went to Trier West which I'd already done. Friends located at Trier, various German beers (one altbier, one Ur-Pils, one weissbier) were sampled during the lunch break before rejoining 5519 and the diesel. The diesel was detached at the border and 5519 was thrashed cheerfully to Thionville, pausing for a couple of photo stops. 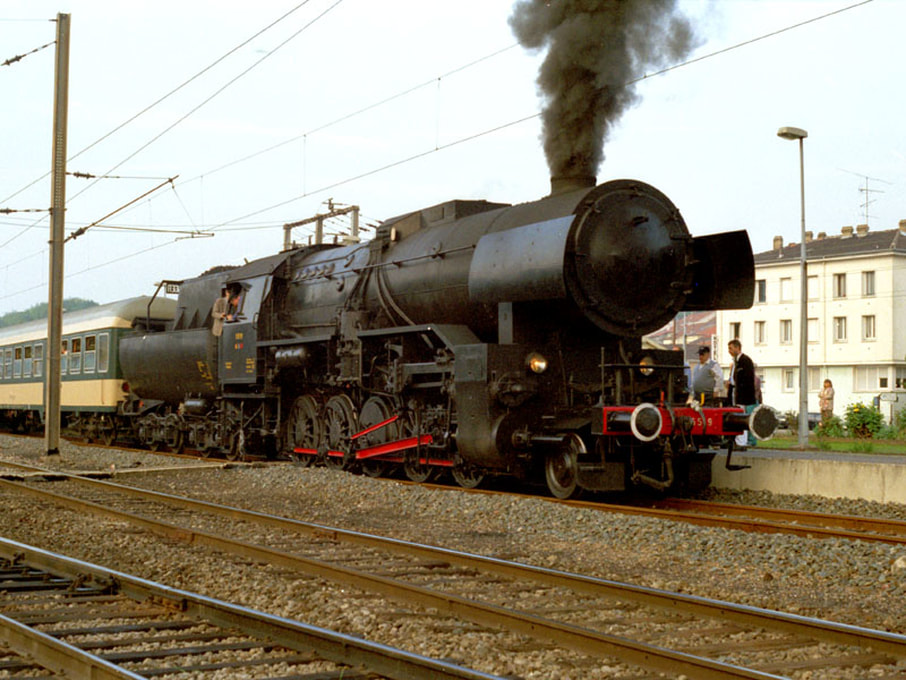 5519 posing at Apach, 15.10.95
At Thionville a glass of '33' was taken in the station buffet while 5519 was turned. Another brisk run was had to Bettembourg and Luxembourg with a nice view of 5519 working hard on the left hand curve out of Thionville. A dreary ride followed back to Brussel Noord on a wedged 1827 from Luxembourg, losing time all the way but just making it to Brussel Noord in time for the 2134 to Aalst.

Goodish breakfast at De la Gare before departure on the 0721 to Geraardsbergen where we changed on to the 0804 to Brussel Zuid. Having validated my Tourrail ticket for the day I realised that for the price of the fare Aalst-Brussel I could have used it for a full day at another time. Never mind, won't make the same mistake again.

At Brussels we found 'au Laboreur' this time but it was shut despite alleged 0900 opening. JR retired to Brussel Zuid for a beer, while I went unsuccessfully in search of a beer shop but found the pub opening on my return. Left it for later and had two quick Duvels before catching the 1030 back to Waterloo, then the HST connection back to Wolverhampton.

The duty free-fuelled cheap fares were still going strong on the ferries and I was back to Belgium a month later.